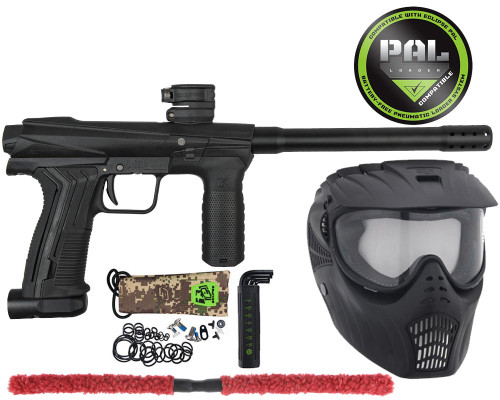 The EMEK 100 Starter Kit comes with the following items:

The Planet Eclipse EMEK100 paintball gun is a great option for those looking to play paintball without taking out a loan. We all know the prices that some of these paintball guns can reach and itâs way up there! The EMEK 100 retails for just $219.95 and is built to last. The idea behind the design is simplicity with durability. A paintball gun does not have to give up performance to become reliable or cheap though and thatâs where the EMEK 100 comes in. The high level quality that Planet Eclipse has become recognized for can be seen in the EMEK 100. There are no batteries required as the gun is completely mechanical. One trigger pull equals one shot! The trigger has a smooth and light weight trigger pull to make shooting easier and more accurate. Thereâs no need to use all your strength to pull the trigger which in turn jerks your gun causing your shot to go way off course. With the EMEK 100, you can rest assure knowing that itâs capable of shooting right where you point it and itâll be easy to stay on target. The drive train that powers the EMEK 100 is the Gamma Core Bolt System. The industry-leading Gamma Core Bolt System is efficient, smooth, and requires little maintenance. Paintball guns arenât supposed to be difficult to maintain and thatâs the whole idea behind the EMEK 100. Get out there and play today! Those looking to have a tactical experience can add on an EMC kit to mount additional accessories. EMC kits are sold separately.