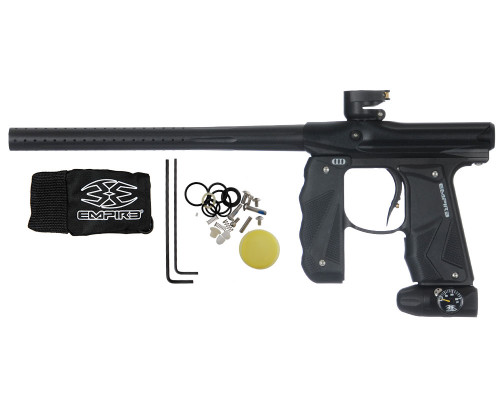 The Mini GS is Empire's next generation of legendary paintball markers!

Empire had mighty big (Mini) shoes to fill, but their engineering team found a way to improve on the old Mini formula. Built around the already proven Mini engine, the GS features an on/off ASA so you can smoothly remove or change out your tank. Those annoying thread issues are now a thing of the past. Also, the ASA and foregrip attach points have been strengthened and reinforced, to give you added protection and performance.

But the real innovations come from the new foregrip in the Mini GS. Full wrap-around rubber provides extra protection and extreme grip. It also has room for you to drop in a Redline OLED board without switching the foregrip, so you can customize the Mini GS' innards, too. And since the Mini GS can be maintained with only 2 hex keys, cleaning it or swapping out parts is easier than ever.

Improving on the Mini legends of the past was a challenge, but Empire scored a hit with its new Mini GS!