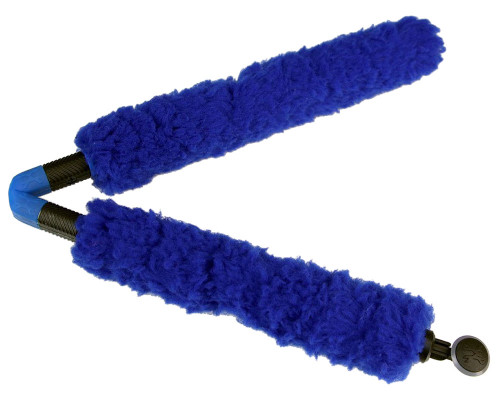 The HK Army Blade Barrel Cleaning Device is the newest and greatest accessory that every paintballer should have in their gear bag. The HK Army Blade BCD is a bendable barrel swab and squeegee in one. That's two times the cleaning power in one new design! The HK Army Blade swab features two fuzzy ends for cleaning and polishing and a blade squeegee on one end for the ultimate paint remover.

Unlike traditional pull through squeegees where you need to take the barrel off to get the squeegee down the barrel, the HK Army Blade barrel cleaning device features a disk that stays in line when sliding into the barrel but rotates when being pulled out to remove paint and debris. Another new feature is that the HK Army Blade squeegee has a heavy duty connector that is attached with screws. Standard folding barrel swabs are connected with rubber sleeves that can get stuck in your barrel which make it a pain to clean your gun, especially while in a game. With the HK Army Blade swab you won't be left with half your swab getting stuck in your gun during crucial moments.

Order yours today at Paintball-Online!
×

Warrior Chest and Back Protector