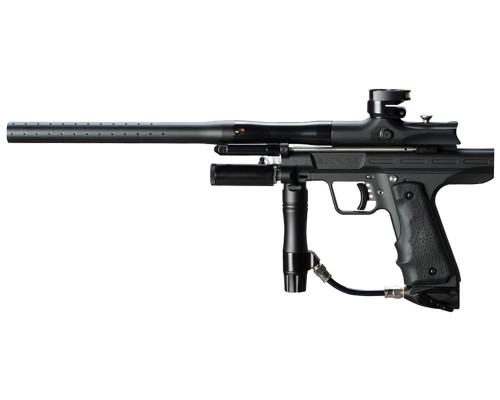 The Empire Resurrection Autococker Paintball Gun is the rebirth of a paintball legend!


The Empire Resurrection Autococker is like pulling the trigger on a paintball time machine. Empire Paintball has raised the classic WGP Autococker from the ashes, refining its features while staying faithful to the original WGP Cocker design. The Resurrection Cocker delivers old school awesomeness for veteran players while introducing the newer generation of players to the paintball equivalent of a 1968 Chevy Camaro.

When designing the Empire Resurrection Autococker marker, the engineers at Empire knew certain iconic features had to be included. The Resurrection comes with an aluminum slide trigger frame that accepts most .45 grips and a lever-action on/ off ASA. The front pneumatics will accept most classic Cocker upgrades such as aftermarket LPRs, rams and 3-ways. An access hole machined through the front block allows an Allen key to pass through for easy access to the actuating rod collar. The half block body design connects the delrin pull-pin bolt to the pump rod via a delrin sled. this allows smooth operation, reduces the length of the marker and has no reciprocating back black to smack you in the goggle lens. Tp prevent rollouts, the marker comes complete with the Empire Resurrection Barrel Kit featuring a 2-piece 14 inch aluminum barrel and 5 inserts from .675 to .695 for a perfect paint fit.

The Empire Resurrection Autococker Paintball Gun is the perfect balance of Old School and New School, ready to take out your opponents just like Cockers have for over 20 years!