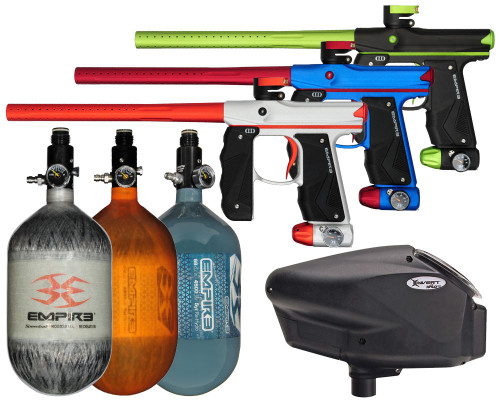 The Mini GS is Empire's next generation of legendary paintball markers!

Empire had mighty big (Mini) shoes to fill, but their engineering team found a way to improve on the old Mini formula. Built around the already proven Mini engine, the GS features an on/off ASA so you can smoothly remove or change out your tank. Those annoying thread issues are now a thing of the past. Also, the ASA and foregrip attach points have been strengthened and reinforced, to give you added protection and performance.

But the real innovations come from the new foregrip in the Mini GS. Full wrap-around rubber provides extra protection and extreme grip. It also has room for you to drop in a Redline OLED board without switching the foregrip, so you can customize the Mini GS' innards, too. And since the Mini GS can be maintained with only 2 hex keys, cleaning it or swapping out parts is easier than ever.

Improving on the Mini legends of the past was a challenge, but Empire scored a hit with its new Mini GS!

New Rubber Grips - The GS Mini has a new rubber foregrip cover and re-designed trigger frame grip for superior handling with or without gloves. New Regulator/ ASA - The GS series comes with a new low profile regulator with a lever actuated on - off ASA. No more chewed up O-rings when you least need it! Weatherized Board and Housing - New weatherproof rubber membranes over the board's foregrip housing and buttons prevent moisture from reaching the marker's electronics. New 2 Screw Size Design - The engineers at Empire reduced the number of Allen screw sizes in the Mini GS to just two. No more hunting for the right Allen key; just two and you're good to go! Microswitch Trigger Activation - The Mini GS boasts a new microswitch over the Hall Effect system for a fast and positive interface with your fingers. Delrin Trigger Bushing - A new self-lubricating bushing reduces friction for a smooth trigger pull. Stronger Clamping Feed Neck - A new glass-filled nylon composite feed neck with aluminum clamping lever is both stronger and lighter than the previous metal feed neck. Classic Mini Compatible - The Empire Mini GS accepts all your favorite classic Mini internal upgrades and components.