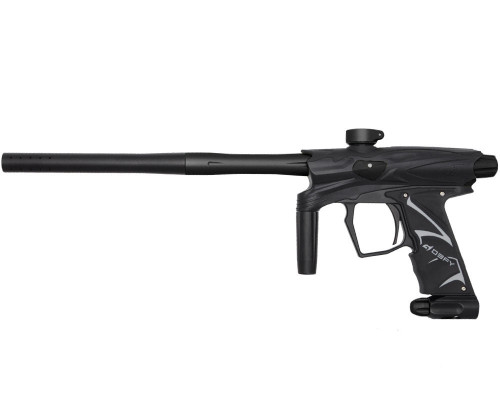 The D3S paintball marker has been design to be user friendly and extremely reliable. It has been tested in various scenarios and stressed to the max. No matter what we put it through, it continues to operate with supreme consistency. Step up your game without breaking the bank with the D3FY D3S Paintball Marker.

This D3FY paintball marker has been designed to perform at a high-end level without a high-end price tag. The D3S is made of an aluminum construction with a polyvinyl chloride outer body shell (Rhyno Skin) body cover. The Marker features our F2 Bolt engine, which incorporates the spool-bolt and regulator in one piece allowing for low operating pressures between 150 and 160 psi. The D3S marker was designed with two things in mind, optimum performance at affordable pricing.

This slick contour profile on/off ASA rises the airflow from your tank to the regulator without the use of fittings and hoses. Itâs smooth beveled knob gives the player a reliable grip for an effortless transition from on to off.

The Tadao SQ Ronin Board caters to all levels of play, with features like; Eye status, Battery life, LED Menu system and Zero power drain while turned off. The board also offers the Industry's first anti-breech bounce software which reduces chopping when the loader is running low on paint. Multiple modes of fire to ensure compliance with all major tournament series: unlimited semi-automatic, adjustable semi-automatic, PSP ramping, PSP 3 round burst, NXL full-automatic, Millennium ramping, custom ramping, auto-response, 3 round burst and full-automatic.

The F2 Bolt engine unique design integrates both the bolt and pressure regulator into a single functioning system. Allowing the marker to operate between 150 and 160 psi

The Anti-Chop Red Optics System (ACROS) is a break beam laser omitting optic. The ACROS eyes is designed to prevent paintballs from chopping in the chamber giving the player one less thing to worry about.

The Rhyno skin sly tough body cover is made of a high strength Poly(Vinyl Chloride) blend material, allowing it to have a thin shell without compromising its strength.

The Direct Drive System Solenoid/Valve directs air to the F2 Bolt engine allowing for a smooth and low operating pressure. Specific air ports were placed to reduce the amount of air needed to release the paintballs from the barrel without compromising itâs efficiency. Thus giving you more time on the field and less time off.
×

Tadao Gun Board - Spyder VS1

Tadao Gun Board - Spyder VS2